Tonight on The Book Show we travel back to 1915, the year before The Easter Rising. We explore the ideas, books and writers that were current at that time.

The show was recorded at The Peacock Theatre in Dublin before a live audience. It was part of RTÉ’s The Road to the Rising event which took place across Dublin’s city centre on Easter Monday.

Joining Sinead on the stage, PJ Matthews, lecturer in UCD’s School of English, Film and Drama and Declan Kiberd, Keogh Professor of Irish Studies at the University of Notre Dame. Both are authors of a forthcoming book, The Handbook of the Irish Revival which is to be published by The Abbey Theatre Press. They discuss the origins of their book and the energetic cultural vision prevalent in Ireland at the time. 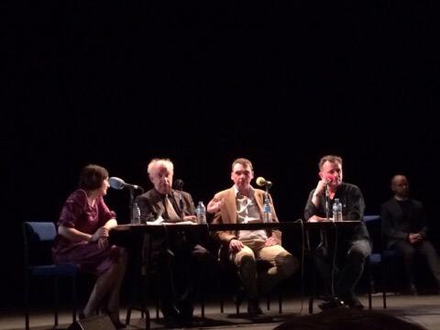 The year was marked by publications at home and abroad concerning themes of prostitution; Virginia Woolf’s The Voyage Out, Patrick McGill’s The Rat Pit, T.S. Eliot’s ‘The Love Song of Alfred J Prufrock’ and DH Lawrence’s The Rainbow. We hear a reading by actress Jennifer O’Dea from Countess Markievicz’s The Experience of a Woman Patrol’ where she makes a direct link between prostitution and the dire conditions of poverty under which many women laboured.

Declan Kiberd and PJ Matthews discuss why the Gaelic League went from a cultural to a more overtly political organisation with Douglas Hyde being sidelined as well as the significance of Pádraig Pearse’s oration at the grave of O’Donovan Rossa.

The Book Show commissioned writer Sara Baum (Spill, Simmer, Falter, Wither) to reflect on 1915 with a short prose work and she reads ‘The Sanded Shard’ about a strange object from a museum, labelled ‘circa 1915’.

Regan Hutchins visits the sounds and sights of a 1915 book shop and is joined by historian Orla Fitzpatrick as they browse the shelves at Fred Hanna’s bookshop on Nassau Street. What did it look like? What was for sale? Orla and Regan send us a postcard from 1915.

They buy a copy of John Buchan’s 1915 thriller The 39 Steps which sold 25,000 copies in its first 6 months. As they leave the bookshop, actor Peter Hanley reads a short extract from The 39 Steps, still widely read 100 years later.

Writer and playwright Declan Hughes joins Sinead to discuss the popularity of Buchan’s short novel and how the world of crime fiction came into its own at this time. He compares the work of the Victorian Sir Arthur Conan Doyle to the writings of GK Chesterton. Declan introduces us to ‘the American Agatha Christie’, Mary Roberts Rinehart who was a very popular pioneer of the domestic suspense trope we can still see in novels like Gone Girl and Girl on the Train.

Jennifer O’Dea returns to the stage to read an extract from Mary Roberts Rinehart’s The Strange Case of Miss Jenny Brice.

Entertainer Paddy Cullivan wrote a song especially for The Book Show’s outing on the Peacock Stage. He plays us out with his satirical, literary and melodic song, ‘A Portrait of the Artist as a Young Rebel’.