This week’s Inside Culture takes an in-depth look at the book, Modern Ireland in 100 Artworks, in which each year is represented by a single work of art – a book, a painting, sculpture, play, a poem or a building.

How do you assess the creative output of a nation over the course of the last century? The very question is an invite to fervent debate and controversy, but that is precisely what the Royal Irish Academy and the Irish Times have sought to do over the last couple of years with this new book.

Our presenter, Fionn Davenport, is joined in studio by Fintan O’Toole, the project editor, and by Eibhear Walshe from University College Cork, and Catherine Marshal, the book’s two associate editors. They discuss, among other things, the project, how the artworks were chosen, and examine what was happening in Ireland compared to other countries at specific points in time.

We also examine a number of artworks featured in the book, including:

1918: This entry is from Pádraic Ó Conaire’s collection of stories set around the Easter Rising – Seacht mBua an Éirí Amach. Diarmuid de Faoite reads from one of the stories. 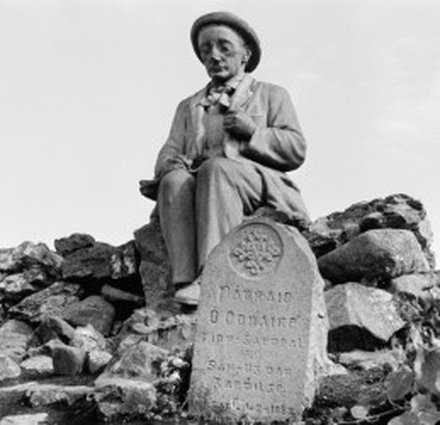 1932: Ireland hosted the International Eucharistic Congress and the organisers went out of their way to communicate it to the heavens above. Regan Hutchins tells us about skywriting over the streets of Dublin.

1948: Busáras Project – Zoe Comyns was in Busáras in 2013 on its 60th anniversary, and she spoke to Michael Scott’s son, Neil Scott, about the station.

1955: – Linda King, lecturer in Design from IADT, describes the artwork from this year, Aer Lingus Summer timetable by Guus Melai.

1981: The Troubles in Northern Ireland are explored in Clifford Rainey’s sculpture, Belfast after Pollaiuolo. Maria Delaney talks to Paula Murphy from University College Dublin about the significance of this work.

Modern Ireland in 100 Artworks is published by the RIA and is available online at ria.ie and in bookshops.