In a year of mass migration to Europe, Brexit, a shock victory for Donald Trump in the US and the rise of populist parties, Holland finds itself in a cultural crossroads – from the European poster boy to enfante terrible. Next year in a general election the far right candidate Geert Wilders is expected to win.

As a cultural hub, Amsterdam is a microcosm of many of the issues more broadly facing Europe. Renowned for its liberalism, its relaxed attitudes towards sex and drugs and for it’s laid back café society, Inside Culture tries to go behind the stereotype to find out what Dutch people themselves believe about their society as it faces testing times and what is it like to live in the city?

Fionn travels to Athenaeum Boekhandel bookshop in the city centre where he met with Jeroen van Kan who edited The Netherlands in 26 Iconic Objects. With other contributors to the book, Renee Kelder and Maarten Asscher Fionn asks if the stereotypical image we have of Amsterdam is true.

Regan Hutchins visits the heart of the old town and travels across the river to the ‘new town’ being built there and looks at the changing nature of residential Amsterdam. Rents are rising, tourist numbers are increasing and it’s almost impossible now to afford to live in the city centre. 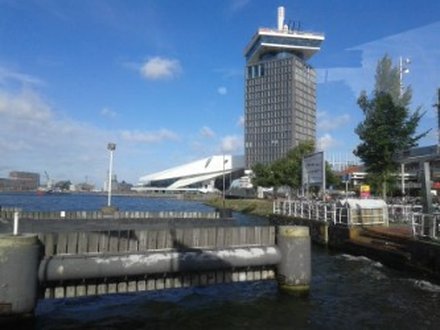 The Shell Tower and Eye Cinema

Zoe Comyns joins Donald van der Laan to discuss DNA spray – a radical method of crime prevention. Certain shops have the ability to spray thieves with DNA as they leave the premises. It raises a lot of questions about privacy, about data collection, about a community response to crime (if you go into these neighbourhoods, you see the warning sign about the spray so you accepts it terms and conditions)

We hear from the Night Mayor, or nachtburgemeester, Mirik Milan, who was elected by the public to negotiate a satisfactory agreement between the commercial interests arising out of Amsterdams continues popularity as a nightspot and the growing irritation of the people who live work and try to sleep there.

Yvette Luhrs runs the Dutch Union of Sex Workers ‘Proud’ and she explains how the liberal side of Holland’s prostitution laws don’t address all of the issues facing sex workers.

Fionn heads for an Indonesian Restaurant Kantjil en de Tijger to join academic Mia Lerm-Hayes, comedian Edo Berger and fashion designer Marga Weimans. As they share food they look at how integrated Dutch society actually is, how attitudes to drugs and alcohol differ from Ireland’s and how the city is changing around them.